Showing posts from July, 2015
Show all

It's Time To March

- July 11, 2015
We have had three meetings over the last three weeks with the parents of the students and the Education Departments officials from the Ambato office.  The government has been closing small schools all over the country and now it is our turn along with Inti Nan, another small school, down the hill and a little closer to the center of town.s

The last meeting was on Thursday evening and when the officials left we voted to march to Ambato with a petition to reconsider.  The government is convinced that bigger is better and by closing all the small schools and integrating the students with the high schools, creating a K through 12 mega school will somehow be better.

I will keep you advised with pictures on Tuesday.  We will hire a bus as we don't have the time to walk.

At a time when finances are really short, if you want to give us a hand, please find a donate button and give it a push.

By the way, we had a beautiful graduation ceremony last Saturday.  Legia, Adriana and Kevin are on…
Post a Comment
Read more 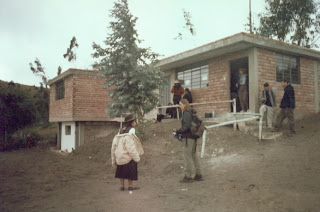 When I made my first post on this blog in January 2007, I had just received a beautiful camera as a gift, from a long-time friend Homero Barrios who lives in Phoenix, Arizona. I took pictures almost every day...And I posted to this blog often. Now that I no longer have the camera I use that as an excuse for not keeping my friends up to date as to what is going on at Katitawa and Salasaka. Shame on me, and perhaps Facebook, for letting that happen. Today as I said goodbye to Laura and Andrea from Italy, I promised to post more often if they would comment. A perfect way to begin again is to look back to where we started.
January 2007.
At the present time there are three projects in Salasaca:

No. 1..In the hills overlooking Salasaca, is the Katitawa School where English classes are being concducted by volunteers. The founding director, Rosa Maria Masaqiza, invited us to provide an English teacher for the school which has 30 students ranging in age from six to 14. The major requir…
3 comments
Read more
More posts

Apply as a volunteer

How to support us

All of the money that we spend comes from donations from around the world. If you think what we are doing here is worthwhile, please check out different ways how to support us or just use the button below to make a single donation.